Why are Holophanes so special?

Light shades have been used, and developed, throughout the history of artificial lighting. Think of oil lamps with their, often highly decorative, glass shades added to stop draughts blowing out the flame. Simple shades fulfilled that protective function, but, they were often added to soften glare too. They became beautifully coloured and decorated during the C19th, especially when they became more commonplace in the home and workplace and light needed not to be rationed any longer.

With the advent of clean, safe, easy to use, more powerful electric lighting came the opportunity to really improve the amount of artificial light that could be provided, especially in factories and workshops. As the efficiency and power of the new light bulbs was developed and improved, so, others work on reflectors to concentrate the light where it was 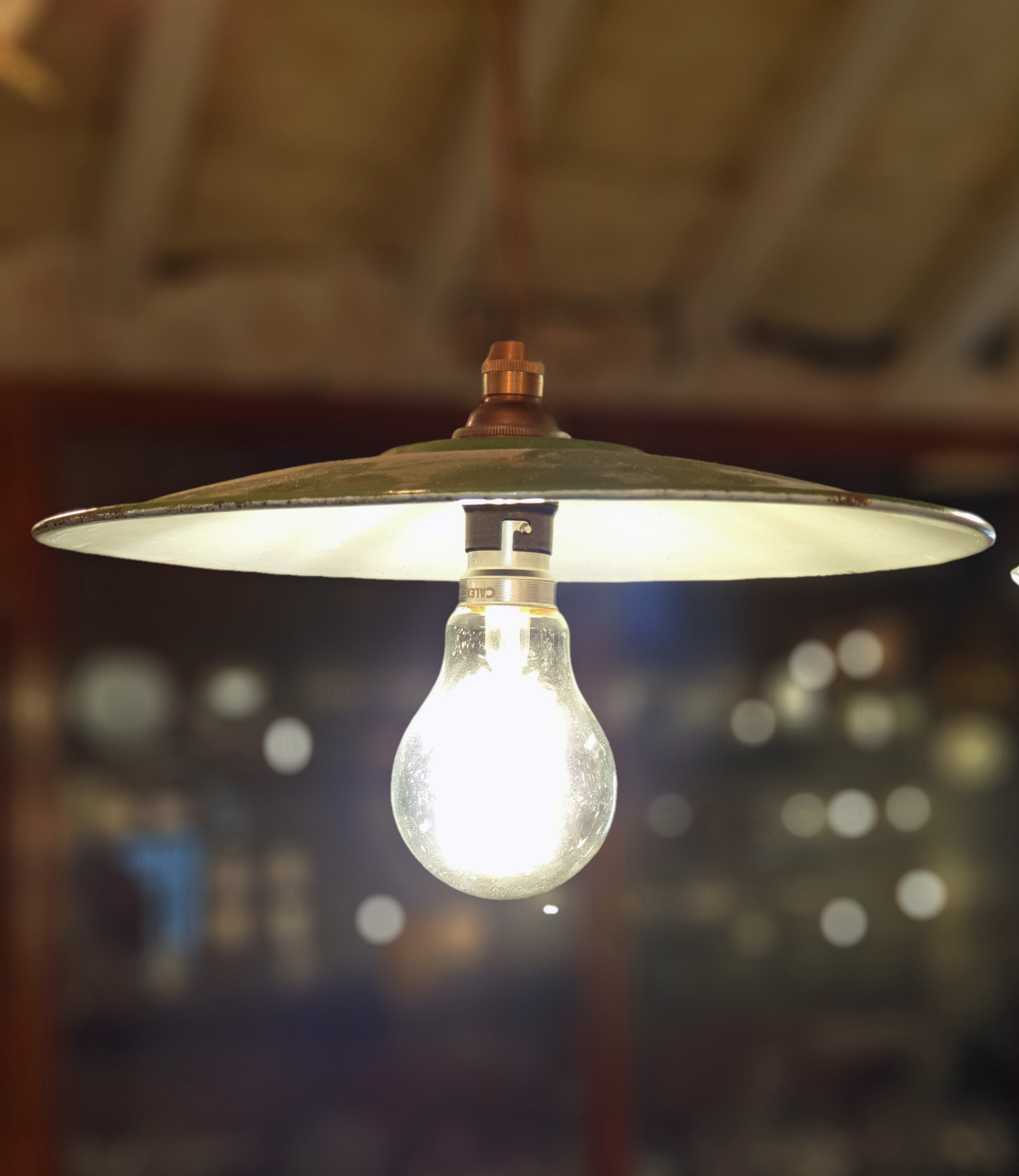 most needed. Polished or white painted discs mounted behind the bulb became commonplace but French electrical engineer Andre Blondel and the Greek engineer, Spiridion Psaroudaki chose an alternative solution. Their work led to a series of patents in France, the U.S. and Britain during the mid 1890s, then Otis A. Mygatt bought the rights to the technology and went on to found the Holophane Company in both Britain and America in 1898. This history of the Holophane Company, and its products, is well covered elsewhere, but, details on the design theory and specific features of these early light shades are not widely known outside industry.

Blondel was a French engineer working on fresnel lenses. These were developed slowly from ideas first proposed in the C18th but came of age during the early C19th when Augustin-Jean Fresnel mounted the first lens in 1823 in the Corduan Lighthouse at the mouth of the 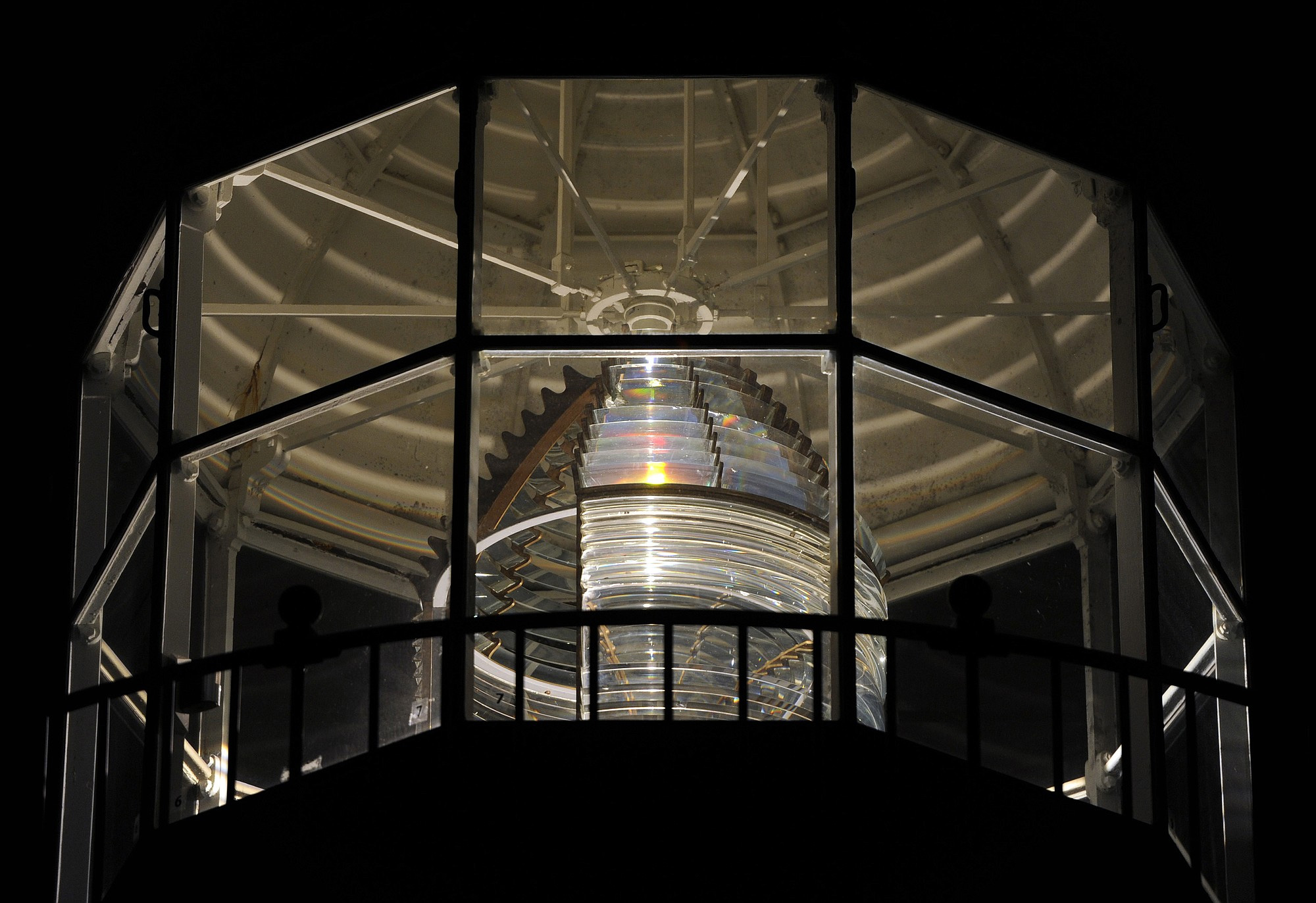 Gironde Estuary. The huge improvement to the visibility of the lights led to their widespread use throughout the world. Today, the easiest place to inspect them are in the plastic lenses of automobile lights and in stage lighting. Blondel's contribution was to explore the possibility of employing the same physics in workshop and domestic lighting. By 1910, his concept had become highly refined and more intimately understood.

Holophane glass shades are constructed with a series of horizontal prisms or radial flutes on their outer surface for re-directing the light rays and a series of internal prisms which follow the law of cosine to give perfect diffusion. (see figs 1 & 2). 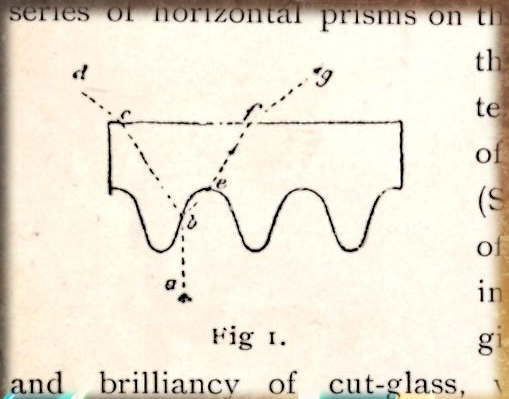 The prisms are designed to re-direct the light rays by both reflection and refraction. No two of these prisms ar 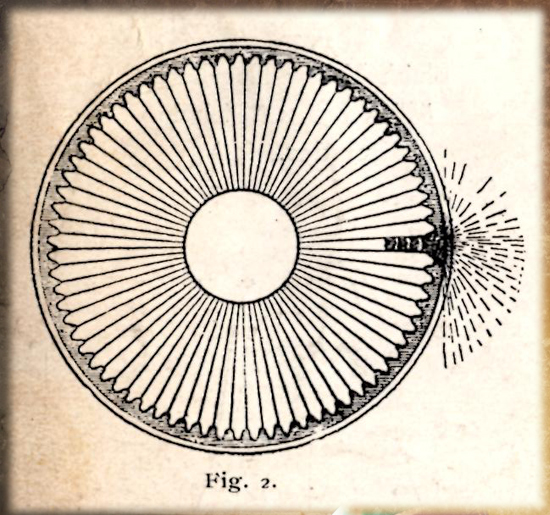 e alike, and each is accurate to within 250 thousandths of a millimetre. The outer prisms are designed, through total internal or double reflection, to reflect the light back through the body of the glass and out of the shade's open mouth. Manipulation of both overall shade shape (dictated by aesthetics) and prism design produced shades with very different light distribution properties.

As examples, here are three types of Holophane Reflectors (shades) sold by BTH in, around, 1910. This range were called Stilleto prisms and each were available in 6 diameters and three edge forms. The three types distributed light differently for different applications by manipulation of the prism shapes. 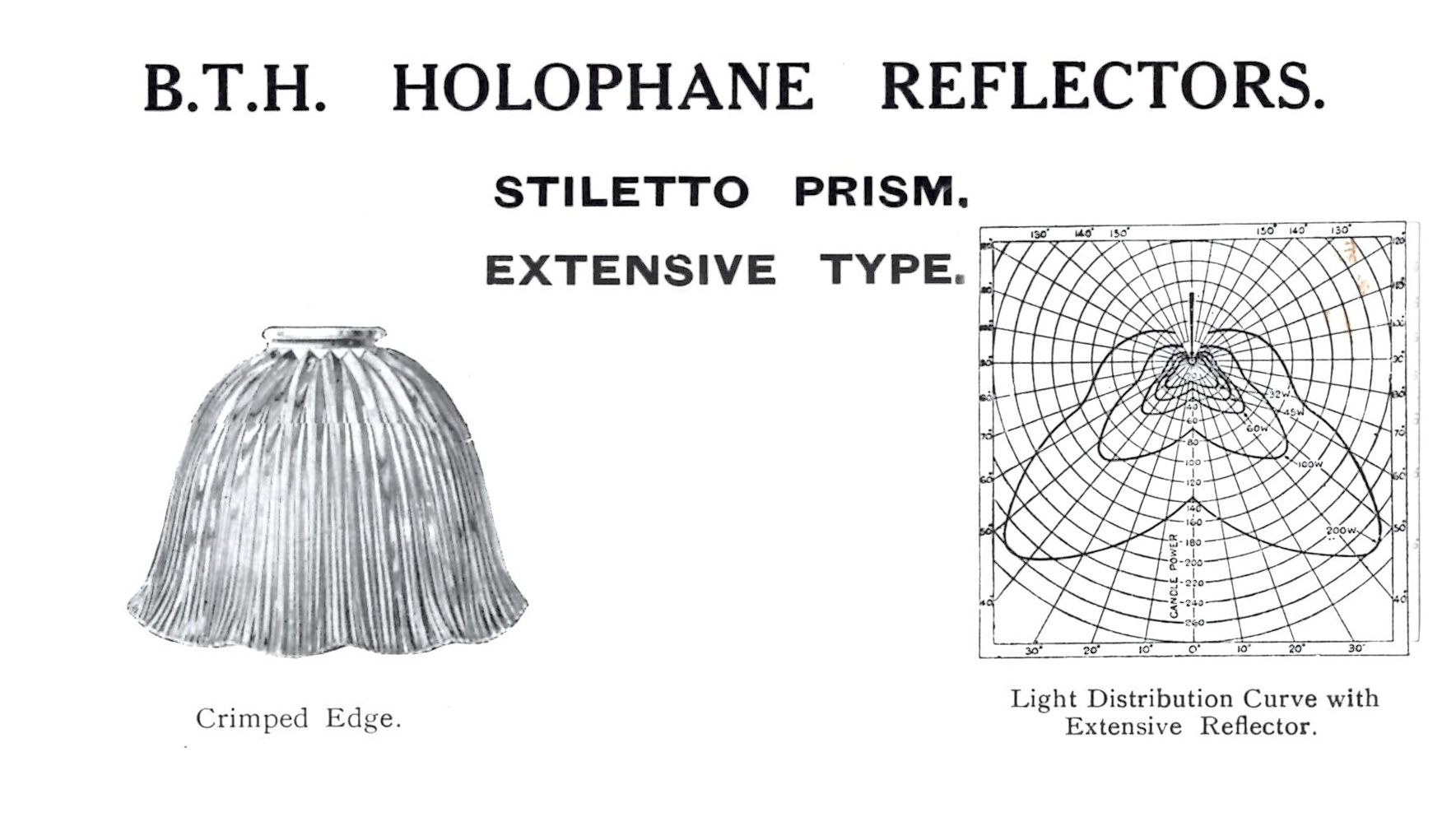 EXTENSIVE REFLECTORS should be placed a distance apart equal to twice   the height of the lamp above the work surface. They were designed for use in the centre of rooms with just one lighting point but also found use in corridors and long narrow rooms where multiple points could be used. They threw light onto the walls too so were useful where shelving lined the room.

INTENSIVE REFLECTORS give light intermediate between extensive types and focussing types and were designed to give uniform illumination of large areas using a number of points. Best used where the lamps are placed a distance apart of 1.5 times their height above the surface to be illuminated. They were recommended for shops, restaurants, reception areas, banks, dining rooms and kitchens where the lighting points are evenly spaced. 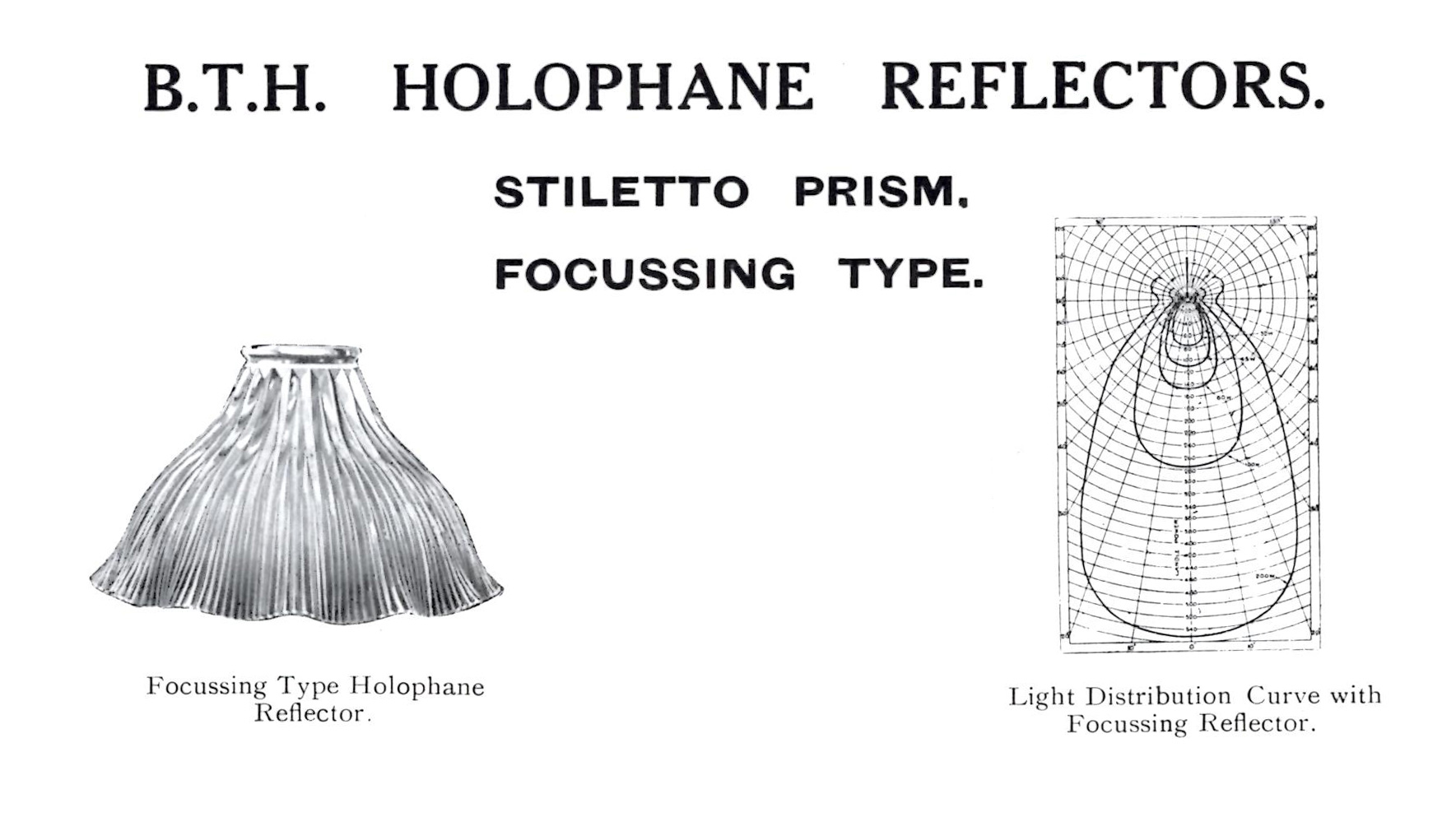 FOCUSSING REFLECTORS throw an intense light over a comparatively small area and should be placed a distance apart equal to twice the height of the lamp above the work surface. They were particularly suited for high rooms and over desks, counters, work benches and kitchen work surfaces.