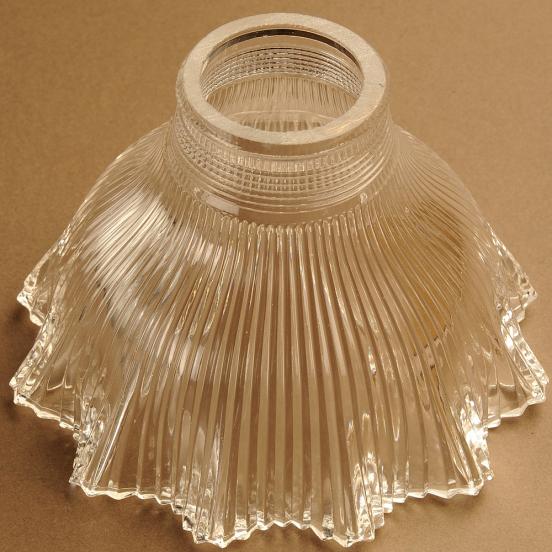 A reproduction of a type of shade with a long history. It measures 5 inches in diameter. Please note that this shade will need a 2¼ inch gallery to adapt it to fit a normal BC bulbholder.

During the early 1890s Andre Blondel, a French engineer and physicist, known for his work in electrical research and an attache to the Lighthouses and Beacons Service, and Spiridion Psaroudaki, a Greek engineer, conceived an idea in a Paris laboratory to cover a glass globe with horizontal glass prisms properly positioned to control light. Patents were awarded to the two inventors in Europe and, upon the granting of US Patent 563836 in 1893, an American, Otis A. Mygatt was introduced to this work. He saw the potential for both domestic and industrial lighting and began to collaborate with Blondel and Psaroudaki.

The advantages of prismatic shades very quickly became clear to a European public demanding brighter light. The prisms effectively focused the dim bulbs output to produce clear, bright, clean illumination and proved very popular in shops, schools, factories, lighthouses and homes. So much so that Mygatt bought the worldwide rights to Blondel and Psaroudaki's invention in 1894 and formed the Holophane Glass Company in 1898 in London to capitalise on his purchase. That same year Mygatt transferred the company to No.1 Broadway, New York.

The term 'Holophane' was derived from the Greek - 'Holos' and 'Phanein' - to contrive the meaning 'to appear completely luminous'. In 1900 Holophane was manufacturing a large range of globes and reflectors and described them thus: [they are made of] 'perfectly clear glass with prisms scientifically constructed in such a manner as to both direct the rays of light in downward and outward directions'.